HARTFORD, Conn. (AP) — A Connecticut policy that allows transgender athletes to compete as girls in high school sports violates the civil rights of athletes who have always identified as female, according to a letter from the U.S. Education Department’s civil rights office that was obtained Thursday by The Associated Press. The letter came in response to a complaint filed last year by several cisgender female track athletes who argued that two transgender female runners had an unfair physical advantage.

The office said in the 45-page letter that it may seek to withhold federal funding over the policy, which allows athletes to participate under the gender with which they identify. The policy is a violation of Title IX, the federal civil rights law that guarantees equal education opportunities for women, including in athletics, the office said.

It has “denied female student-athletes athletic benefits and opportunities, including advancing to the finals in events, higher level competitions, awards, medals, recognition, and the possibility of greater visibility to colleges and other benefits,” according to the letter, which is dated May 15.

Attorneys for the Alliance Defending Freedom, who represent the girls who brought the complaint, said they would comment later Thursday. 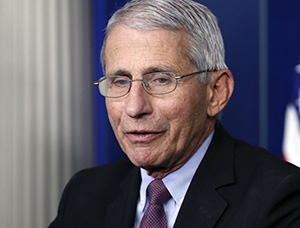 In an interview with the Jesuit-run America magazine published Wednesday, May 27, Dr. Fauci said that churches should “limit the number of people, so that you don’t have people in the pews right next to each other,” and the faithful should “absolutely” wear masks.

Regarding the distribution of communion, Fauci said he does not think there is a safe way to go about it and the practice should be abandoned until further notice.

“I think for the time being, you just gotta forestall that,” he said.

Fauci, who identifies as a Jesuit-educated Catholic who has distanced himself from “the concept of organized churches, religions,” said that at the moment he believes that receiving communion is too risky, even if it involves only the distribution of the consecrated bread without the cup.